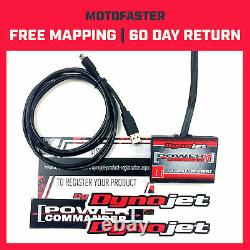 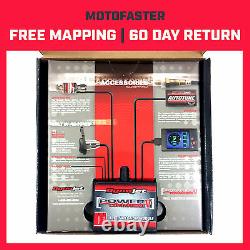 Fuel control for each individual cylinder in a smaller enclosure. "Warm up" fuel adjustment (unit reads engine temp and allows fuel/timing adjustments based on the reading). Reduced size from the PCIII USB. USB powered from computer; 9 volt adapter is no longer needed. Two position map switching function built in.

Can add any SPST switch and toggle between two different fuel. Gear/speed input allows for map adjustment based on gear. Analog input allows user to install any 0-5 volt sensor. Build an adjustment table based on analog input such as boost or temperature. Power Commander V is capable of allowing each cylinder to be mapped individually and for each gear with the gear position input connected.

More tuning ranges than PCIII USB. FREE maps download from Dynojet website. Dynojet has taken virtually the same technology that their patented Tuning Link dynamometer software (for automated Dyno tuning) uses, along with Bosch Wide Band O2 sensors and miniaturized it to be used on your bike, ATV, or UTV, while you ride.

Once installed, the Auto Tune kit monitors the fuel mixture (by installing the included Wide Band O2 sensor in the exhaust). It then sends this information to the Power Commander V and automatically corrects it while you ride.

Each map that they offer has preset Air/Fuel ratio values included that we find to be the best overall settings. This lets you simply plug in the unit and let it do the work.

For advanced users that would like to change the Air/Fuel ratios from their baseline they are fully adjustable. Each throttle opening/rpm combination is individually adjustable, so that you can have both fuel economy, during cruise, while maintaining peak output at larger throttle openings. For most models of bikes it is also possible to adjust the Air/Fuel ratios "per gear". This gives you total control of the fueling in every gear and throttle/rpm area if required. "Picture is a sample to show style of item, actual item might not be exact".

This item is in the category "eBay Motors\Parts & Accessories\Motorcycle Parts\Air Intake & Fuel Delivery\Other Intake & Fuel Systems". The seller is "motofaster_online" and is located in Fremont, California. This item can be shipped worldwide.